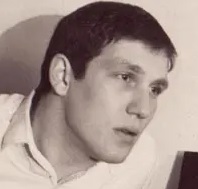 From the thousands of images he created, John Holmes, who has died aged 76, was best known for the book cover he designed for Germaine Greer’s The Female Eunuch (1970). Surrealist and elegantly economical, his work over five decades ranged from dark horror to visual puns, illustrating popular culture, intellectual debates, politics and the human condition. Disturbing, provocative, witty or lyrical, his pictures are layered with meaning.

Born in Hackney, London, John grew up in Bethnal Green. A bright student, he attended the Coopers’ Company school in Bow, did his national service in the RAF, then married Betty in 1956. During the early 1960s he worked as a porter at Smithfield market and at Bishopsgate station to support his young family, while painting at night. He touted his work around Soho, making his first sales to Le Macabre coffee bar for £5.

Initially, I didn’t think of it as a book series. What I proposed was a collection of short stories, each based on a Zodiac sign, so I started the book-length project with more than a little reluctance. As the products appeared in print, some of my friends allowed as how I “didn’t seem to be having much fun” with them. They were right, and I think the writing proved the point. In any case, when Pinnacle dropped that project (and others of its ilk), I felt very relieved. – Robert Lory on the Horrorscope Series

His first solo exhibition was in 1961, at the Raille Gallery, Islington. Initially abstract, his work became figurative in 1964 when his young daughter, Johanne, was badly scalded. His rendering of flesh as weighty, sensual or injured was enriched by his experiences at Smithfield. A chance sighting in 1965 of a notice about further education for working men led him to a place at the London College of Printing, supported by a Royal Society of Arts bursary.

Nine months later, he was appointed art director at the advertising company Ogilvy & Mather. John also took on multiple commissions, frequently working all night on book and record covers, paintings and illustrations for a diverse range of publications, including Nova, Money magazine, Playboy, the Australian and the Chronicle of Higher Education.

A photographer friend introduced him to Dave Larkin, the art director at Granada Books, for whom he did covers for the 1969 edition of Vladimir Nabokov’s Despair and for The Female Eunuch (which Greer loved). A commission from Larkin for Pan’s UK paperback of Peter Benchley’s Jaws (1974) was followed by jackets for Ballantine’s editions of HP Lovecraft’s horror and fantasy novels and artworks for Fontana’s Horror Stories series. The dark complexities of horror stimulated a rich seam of imaginative and disturbing images, especially of the mutability of the human face. Detective novels, drama, sociology, astrology books and women’s liberation texts all carried John’s artwork.

His cover for Hamlyn for Susie Orbach’s Fat Is a Feminist Issue (1978) was criticized by many (including the author) and its second edition had a different design. John said: “I don’t disagree with the feminists’ motives, but I don’t know if my insensitivity is any worse than their iconoclasm. If they have elected themselves the judges of our society, so be it. All I wanted to do was sell a few bloody books.”

Commissions for illustrations dominated his output for many years, but when he was in his early 30s, John also started to paint again on his own terms. Never at a loss for words, he revelled in rhyming slang, puns, wordplay, Yiddish (widespread in the East End of his childhood), backslang and Polari. Similarly, his paintings play with multiple or concealed meanings. A clock face disintegrates into vein-winged flies (Time Flies); humming-birds fill the red halo of Beethoven’s deafness (Beethoven II); a piano beneath a starry sky has fruiting cherry trees for legs (Nocturne).

Peter Haining was probably the only writer ever to make a living out of editing anthologies, a means of employment that is, even today, notoriously ill-recompensed. He did this by dint of sheer hard graft and the simple expedient of always having four or five volumes of stories on the boil for every one about to be issued. He was one of the first modern anthologists to realize that the 50-year copyright. He explored, and plundered, sub-genre after sub-genre. Gothic Tales of Terror (1972), in two hefty volumes, reprinted a treasure-chest of forgotten stories from roughly the Regency period to the Victorians. The era of the “Penny Blood” (the 1840s to the 1880s) brought forth The Penny Dreadful, or Strange, Horrid and Sensational Tales (1975), with quite a few strange, horrid and sensational titles such as “The Last Batch of Pies” (a tale of Sweeney Todd) and “The Arena of Blood”.

An early series of paintings about Jack the Ripper featured in Robert Vas’s BBC film Belonging (1967). Laurel and Hardy, together or singly, were favourite subjects, and the boxer Jake LaMotta was depicted battered and on the ropes at the moment of defeat. John’s work was featured in a retrospective, Time Flies, at King’s Lynn Arts Centre in 2009.

John and Betty were generous hosts; his exuberance and wit enlivened many gatherings. For about a year after his family moved to a farmhouse in rural Suffolk in 1973, people turned up every weekend to help restore the building and to party. John was a very private and modest person, valuing his own company and periodically retreating from family and friends. Ill health from the late 1980s onwards restricted his activities, and he accepted fewer commissions. He continued to paint, making cards for a favored few at Christmas.