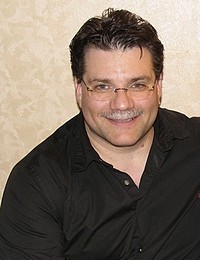 Daniel Was born in Pittsburgh. Pennsylvania in 1960.

He grew up in a home where his mother and grandmother were doll artists.

Daniel’s artistic awakening came from the paintings and sculptures of the Catholic church that he attended.

It was the story telling that these works of art had that fired Daniel’s imagination and sent him down the road to becoming an artist and telling his own stories through his art.

While attending art school, Daniel had the rare privilege of apprenticing with master artist , illustrator and storyteller in paint,

It was Ken who schooled Daniel in the Howard Pyle school of illustration.

This training gave Daniel the ability to tell stories with his art , to focus on characterization, mood and setting.

Daniel’s career as an illustrator has spanned the past quarter century, painting, in oils over 400 book covers for every major publishing house in new York and his Children’s book :Young Merlin won the 1991 Children’s choice award for best illustrated children’s book.

Daniel has gone on to become the cover artist to the hardy boys book series and has made his mark in the fantasy field by painting some of the most memorable fantasy images of his generation.

It was not till a friend sent a small sculpture of Saint Nick that the long dormant longings to create 3D images .

Daniel didn’t have an interest in sculpture in art school but when he started to make his first doll, it felt like it was he was meant to be as an artist.

For the first time Daniel felt the connection between his mother’s art, his grandmother’s art and his own.

When Daniel attended Jack Johnston’s doll making seminar in 2006 in Philadelphia, he knew he was on the right track.

Daniel’s life and art has come full circle as he adds doll making to his artistic endeavors.